Dogs are well known for their intelligence as well as incomparable loyalty towards their masters. Dogs are a special presence in the lives of those they touch closely. What makes them all the more special is their ability to sense certain events before they are about to happen. Well some people even believe that dogs can foreshadow death; however there isn’t any scientific data to confirm this belief. It is proven that dogs are very intuitive and can tell if you are happy or sad by examining your voice and reading your body language and may even respond or empathize with you accordingly. Let’s take a look at what all they can effectively sense beforehand. Thunder/Stormy Weather: When a storm is approaching your dog will jump onto your lap for cover or may start to bark loudly in an attempt to warn pack members towards a possible danger. If we are able to pick up these signs each time then we can be well prepared to tackle bad weather conditions. At this point you all must be eager to know the science behind a canine’s power to foretell a storm or thunder. A climatic change is preceded by a change in the static electric field and a drop in the barometric pressure that dogs can easily pick.

The pooch is also capable of hearing the roar of thunder even before it lashes out upon us in its full fury. The thunder sounds and vibrations are heard by the dog much before us as they are gifted with a sense of hearing that is twenty times more powerful compared to humans. Apart from the scent of rain in the air your pooch can smell chemicals accumulated in the atmosphere; that humans can’t even process.

Earthquakes: Seismologists believe that a dog can predict an earthquake as it can feel the vibration of the earth through their paws. Another group of scientists maintain that due to a highly sensitive hearing canines can hear when rocks break under the earth. Not just dogs but some other animals too have been seen displaying odd behavior before an earthquake. Human Ailments: Yes, your dog can sniff out cancer using its tiny nose. Studies reveal that cancer cells give out a distinct odor as they discharge different metabolic waste vis a vis healthy cells inside the body. The dog is able to smell this mild odor given out by cancer cells, even when the disease is at a very initial stage. 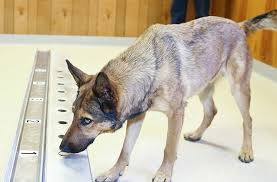 Dogs can also sniff out an irregular drop in blood sugar level that occurs in case of type-1 diabetes. Researchers at Cambridge University have found out that a fall in blood sugar overlaps with a rise in isoprene (a natural chemical) that we release through breathing. But it is still not fully known if dogs are able to smell this chemical in the process of detecting the illness. Perhaps some other molecules at play are smelled by the pooch.

Some dogs can be trained to recognize signs of an approaching seizure in their owner and alert him/her too.

Pregnancy and Labor: When a woman conceives, her body undergoes certain physiological changes. There is a comparable difference in said individual’s body odor and appearance. The pregnant lady experiences mood swings and there’s also a change in her overall body language. A dog can easily comprehend these transformations. However scientific research is still underway to offer a solid evidence to support the dog’s ability to sense pregnancy. It’s also interesting to note that cases have been reported where dogs were able to predict the arrival of labor pains. In some of these cases it was seen that the dogs began following their pregnant humans everywhere twenty four hours prior to the start of labor.

Dogs are indeed fabulous in so many ways! Follow its signs and you may be able to avert an approaching mishap/dangerous situation. Canines can also warn you towards people/strangers with wrong motives by reading their body language and look on their faces. If your dog displays a great amount of dislike for a certain person, that could be a signal to stay away from him/her. Military dogs deserve a special mention as they are effectively trained to detect explosives, drugs, weapons and to track & attack enemies.