Are you a football fan and crazy for dogs too? We have an eye candy for the soccer groupies and clear evidence that these Gods of football are in love with their DOGS. 1. Neymar a.k.a Neymar Junior: A Brazilian professional footballer. He plays as a forward for FC Barcelona (Spanish Club) and Brazil national team. Neymar is a proud owner of a Golden retriever named Poker.
Image: http://www.dailymail.co.uk 2. Lionel Messi: Touted as the best football player in the world, this toughie is not just the greatest footballer mankind has witnessed but also a superb dog parent to a French Mastiff (Dogue de Bordeaux). This picture shows the laid back side of a doting dog lover. The Argentine professional footballer is a forward in Spanish Club, FC Barcelona. Image http://www.dailymail.co.uk 4. Christiano Ronaldo: The famous Portuguese player is a Real Madrid star, plays as a forward for this Spanish Club and the Portugal National team. We got hold of one of his pictures with his adorable Labrador Marosca and can’t stop looking at it. Image http://www.90min.in 5. Alexis Sanchez: He plays as a forward for English Club Arsenal and the Chile national team apart from his not so professional football games with his two Golden Retrievers, named Atom and Humber in his yard. http://www.dailymail.co.uk

6. James Rodriguez: He plays for Real Madrid and captains the Colombia National team. James de-stresses in the company of his three dogs, a Golden Retriever, Cocker Spaniel and French bulldog as seen in a happy pose in the picture. Image http://www.dailymail.co.uk 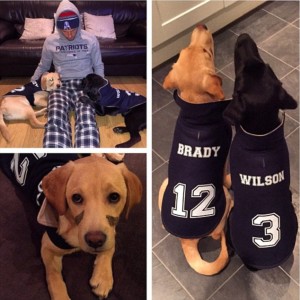 8. Harry Kane: Harry plays as a forward for Premier League Club, Tottenham Hotspur and English National team. When he’s not on the field, you’ll find him relaxing with his two Labradors, Brady and Wilson. Check out this cool trio chilling together and for them three’s not a crowd. Image http://www.dailymail.co.uk 9. Mesut Ozil: The Arsenal player has an interesting story to tell when it comes to canines. Mesut revealed he was fearful of dogs before he decided to get home a cute pug to defeat his fears. He named it Balboa. The process of raising the dog and spending copious amounts of time with it has helped Mesut make this transformation into a genuine dog lover, a far cry from being afraid of dogs. http://www.dailymail.co.uk 10. Aaron Ramsey: This Welsh midfielder plays for Premier League Club Arsenal and Wales National team. Apart from his super sporting abilities he also dons the role of a glorious dad to this cute Beagle named Halo. Apparently Halo got her name after his fans were asked to pitch in suggestions. Image – www.90min.in David Beckham with his Cocker-Spaniel.Image www.dailymail.co.uk

Ruling the roost here is one of our all times favorite soccer stars, former footballer David Beckham who played for Manchester United and Real Madrid. He owns Bulldogs named Coco & Scarlet, a Shar-Pei named Barnaby and Olive the Cocker Spaniel.