How to stop a dog fight.

A brawl at a dog park can occur almost unexpectedly between canines being amiably introduced by their respective owners. Sometimes even canine mates can enter a scuffle over matters related to food or their favorite dog toys. One minute you could be peacefully walking your leashed dog and the next, you are a spectator to a dog fight with your pet dog being actively involved. 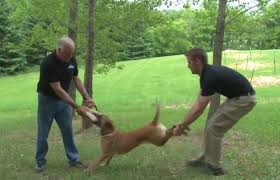 The Wheel Barrow Method is an approach where two people are required to carry it out. The humans involved are required to lift the hind feet of each dog and pull it off the ground. Image: www.thedodo.com

If a situation has provoked a fight between two dogs, you must act but calmly and ensure you do not get hurt. Now the question is how to take the right steps to safely bring things under control? It is important to act upon the dog exhibiting a higher level of energy. In simple words, focus on the dog biting the attackee/victim.

Touch the attacker at the rib-cage area to divert its negative energy. Your touch will initiate the process where this dog will release its hold on the other dog (by opening its mouth) and stop biting. If a situation has provoked a fight between two dogs, act upon the dog exhibiting a higher level of energy to stop the fight. Image:www.pethelpful.com

The next step involves you to hold the dog (the one regarded as the attacker) from the back of its neck/collar and pull it upward. Do not grasp the collar as the dog can bit you. Also never pull up the dog from front/top lest you will be thought as one of the contenders in the fight and the dog overcome with high intensity may bite you, not realizing your real role as the human grappling for truce. A wrong move and you will be regarded as another dog taking part in the scuffle and to your utter surprise the dog you wanted to defend can turn into your archenemy raring to come after you. You can also use a strong voice toward the dog before you pull it up from the back.
The technique to end a fight remains same for dogs of all sizes. The dog owner or a Good Samaritan willing to help can follow this approach in case he/she happens to come across a dog fight and wishes to break it.

Fighting is usually a last resort for dogs to resolve their issues. Most dog-fights last only a few seconds and end when one of the dogs agrees to relent. Canines tend to let off warning signs first. It is a way to work on their troubles and back away without aggression.

READ MORE: How to socialize your dogs with other dogs?

There are some ways to end a fight without actually intervening in it and that involves the use of squirt bottles or directing a blast of water from a nearby hose over the dogs. People may beat coins inside a can for the purpose of ending canine hostilities. However these methods only work at the earliest stage when the fight has just begun. Human intervention is inevitable in a full on battle, here verbal cues don’t work at all.
The Wheel Barrow Method is an approach where two people are required to carry it out. The humans involved are required to lift the hind feet of each dog and pull it off the ground. This will cause the dogs to disengage and free the hold on each other. Thereafter the dog owners need to separate the dogs by pulling their back legs. Splitting them in this fashion almost instantly will allow the pets to get over the episode. Splashing water on dogs through a water hose/pipe is an effective method to stop dog fights. Image: www.wikihow.com

Can a dog fight be prevented? Let’s see how it can be done! Dogs communicate (to human beings as well as animals) warning signals through their body language. The first step to effectively decode a dog’s language is to realize that things you do to express emotions vary greatly from the actions adopted by a dog to express similar feelings. Nervousness in a dog is expressed through licking its lips. Fear can be given out in the form of a wide smile. When a dog is scared it could be shivering and will look the other way, wanting to run for cover. You will notice its ears have fallen flatly and its tail either stands erect or has been tucked between the legs. Yawning too can be linked to stress and a fearful disposition. Yawning, tail being tucked in as well as the other signs listed above clearly indicate that the dog is uncomfortable around a dominant animal or person. The frightened dog may react after giving out one final sign termed as the whale eye. In this the dog keeps an eye on what it sees as a threat by moving its head away from it and in doing so the white portion of the dog’s eye becomes very prominent. A diligent move will be to remove the other dog away from this dog. The other dog could very well be your pet, hence its best to separate yourself as well as your pooch from the situation to avoid a dog fight and bite.