Tips From Celebrity Canines When Naming Your Pet

I once heard a stand-up comedian tell a story about when he purchased a puppy for his parents as a Christmas present. He held onto that little mutt for a few weeks in order to keep it a secret from his folks and gave it the temporary name of “Ruff” as a joke. The son didn’t expect the name to stick, nor did he realize how funny it was to see his father calling out the name of their new dog while appearing to be barking outside on his parent’s porch; RUFF, RUFF, RUFF!

That’s just one thing to consider when naming your pet, what will it sound like when you’re loudly calling their name in your neighborhood, back yard, dog park or other public location. There are other things to consider when saddling your animal with a name that should last a lifetime. Take some tips from famous pets and celebs to see if you can come up with an appropriate title.

A Pedigree Pooch In The Big Apple

As many of us already know, Sex In The City was a very popular dramatic/comedic television show that successfully ran for six seasons and spawned two hit movies in it’s wake. While showcasing the dating adventures of four wildly different gal pals living in New York City, some of the many characters from this series were proud pet owners.
Most notably perhaps was the shy character of Charlotte who was gifted with a purebred pooch (a Cavalier King Charles Spaniel) named Princess Dandybridge Brandywine (later renamed Elizabeth Taylor by Charlotte). While this may seem like a star-studded title for this royal dog, it’s not that uncommon for purebred animals to have elaborate names that tie into to their bloodlines and are then later shortened or renamed to just one or two names from their sires, mothers or whatever the new pet owner wants to call their precious pooch.

Perhaps one of the most recognizable animals of all time comes from a classic movie shot almost eighty years ago, that would be the immortal Toto from The Wizard of Oz. A short name like Toto with hard sounding consonants actually makes a great name for cats too.

These sharp sounds are easily recognizable by animals, which makes it easier for them to hear, especially from long distances. Even the name Katie, that sounds remarkably similar to the classic “kitty” makes for an excellent title that a dog or cat that is easily recognized and ultimately respond to coming when they are called by this name. 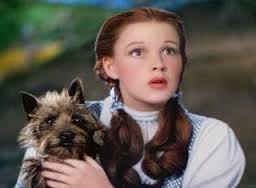 The name Spot was long-given to dogs for many years and this antiquated namesake has practically disappeared when it comes to the most popular names given to pets nowadays. While not necessarily given to a canine covered in dots, like a Dalmatian, for some reason this name stuck for many decades. But matching a title to a pet that agrees their appearance or personality isn’t that uncommon either, remember Lady And The Tramp?

Naming a cat Fluffy is another example of a popular cat name that’s gone by the weigh-side (pun intended), that described a feline that happened to be puffy. But calling an animal something that describes what they look like can also be a great title to give to your pet.
For example, our wonderful Latino neighbors just got a puppy, a gorgeous cross of a husky, labrador and shepherd and he looks exactly like a cuddly, little teddy bear. They named him Oso (which is Spanish for bear) and by the looks of his paws, he’ll certainly grow into that large title. For right now, he’s simply, just “oh-so” cute, but soon he’ll be near the same size, shape and appearance of his namesake.

Whether your new best friend already comes with a name, you decide to change it, name them instantly upon arrival, or wait for their personality to give you a clue … it’s all up to you. Travel junkie, Amber Kingsley, is a freelance writer living in Santa Monica, CA. Her art history background helps her hone in on topics that are of interest to readers. She is a dog enthusiast and loves spending time with her pomeranian, Agatha.