Why Some Cats Begin To Sleep In Their Litter Boxes?

A cat sleeping in its toilet is definitely weird and a bit worrisome too! It’s a known fact that felines keep themselves constantly clean by licking and grooming its fur. So if your cat begins to choose its litter box over a neat plush cat bed, it may leave you wondering at first followed by valid concerns. 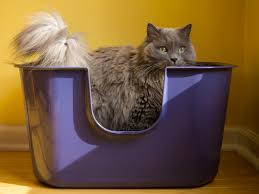 Some Possible reasons when cleanliness freaks don’t wish to leave their litter boxes alone and ways to change this unhygienic behavior. Image – nvrmiss.com

Add another box with bedding or blanket instead of cat litter in it so that your furry feline has a germ-free option to enter, doze-off and feel safe. Your kitty will appreciate you adding some cardboard boxes in the new home as cats love to spend time in enclosed spaces and derive a sense of security. In due course of time the kitty will begin to explore its new surroundings and use the litter box only when it has to pee & poop.

To prevent litter box guarding/territorial dominance, add as many litter boxes as there are cats in your home. Plus an extra cat toilet in a common space accessed by all of them. However some cats feel comfortable in sharing their toilet with their furry mates. In case the second pet is a dog, make sure your cat’s litter box is placed in an area where the cat can reach without being pried by the dog. Image-docandphoebe.com

Synthetic cat pheromone sprays are available that can be sprayed around the litter box; this will curb the cat’s desire to hide in it.

Dysuria is a result of a urinary tract infection, or presence of crystals or tumors in the bladder. When a cat suffers from Dysuria it is unable to urinate properly because of which it may continue to lie in its toilet so that it can repeatedly try to pee.  Apart from an urge to pee and unproductive urination Dysuria also causes painful urination and blood in the urine. There is also immense weakness and fatigue experienced by the cat due to which it is unable to move and keeps lying in its litter box.

It’s best to replace the old litter box with one which has low sides. Also place it close to the feline’s most used sleeping spot. These alterations will make sure it has an easy & comfortable access to its toilet.

Litter boxes even when cleaned regularly by you aren’t something where your cat should be spending extended amounts of time. There is always the risk of falling ill due to the presence of bacteria living in litter boxes. If your pet has started spending an abnormal amount of time in its toilet lately and you are unable to figure out which of these situations apply to your kitty, consult a vet without delay for more clarity on the matter.